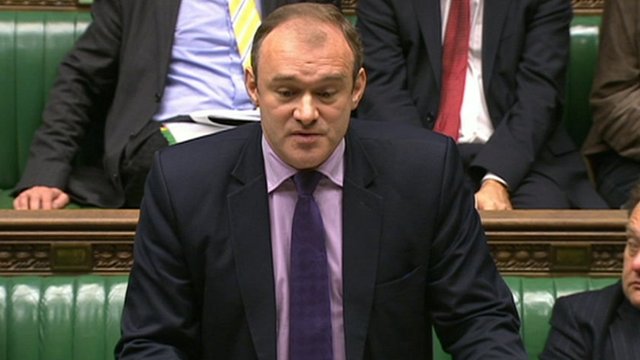 Energy minister Ed Davey has unveiled the government’s much-trailed Energy Bill, setting out the roadmap for the UK’s switch to “a low-carbon economy”.

Energy companies will increase the amount they levy consumers from £3bn to £7.6bn a year by 2020, potentially increasing household bills by £100.

But big, energy-intensive companies will be exempt from the extra costs of the switch to renewable energy.

The “transformation” will cost the UK £110bn over ten years, Mr Davey said.

He told MPs: “Britain’s energy sector is embarking on a period of exceptional renewal and expansion.

“The scale of the investment required is huge, representing close to half the UK’s total infrastructure investment pipeline.”

The government’s plan formed the “biggest transformation of Britain’s electricity market since privatisation,” he said.

The Energy Bill aims to move the UK’s energy production from a dependence on fossil fuels to a more diverse mix of energy sources, such as wind, nuclear and biomass.

This is to fill the energy gap that will from closing a number of coal and nuclear power stations over the next two decades, and to meet the government’s carbon dioxide emissions targets.

Mr Davey said government policy was “designed specifically to reduce consumer bills”, arguing that without a move to renewable energy, bills would be higher because of a reliance on expensive and volatile gas prices.

But in a statement published alongside the Bill, Mr Davey said energy-intensive industries, such as steel and cement producers, would be exempt from additional costs arising from measures to encourage investment in new low-carbon production.

“The transition to the low carbon economy will depend on products made by energy intensive industries – a wind turbine for example needing steel, cement and high-tech textiles.

“This exemption will ensure the UK retains the industrial capacity to support a low carbon economy.”

Without the exemption, the government fears big companies would cut jobs and relocate abroad.